Mary of the High Seas the Novella 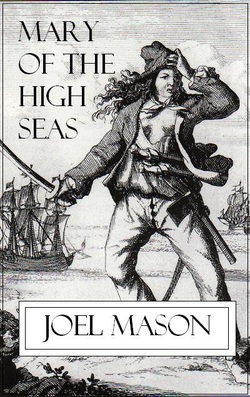 Hi everyone,  Great news!!!  Mary of the High Seas now exists as a novel (or a novella really).

You can purchase an electronic copy directly from us.

Just contact us through this website and once we've acknowledged your emial, we'll ask you to send £3.99 by Pay Pal.  When that's taken care of we'll email you a copy of the manuscript and you'll be off and running.

You can even suggest edits and additions once you've read it...
Here are a couple of paragraphs from the book:
From CHAPTER SEVEN
Jack closed, and then locked the cabin door behind the last man.  He glanced briefly at Bon as he crossed to a small chest at the back of the cabin while Bon filled their two flagons with the lush Spanish wine.  “That was a fine bit of work ya did today Bon,” he said, as he quietly removed something from the chest.  “In fact, I think you deserve a little reward.  How does this strike yr fancy?”  Jack held up a diamond necklace set with seven cabochon rubies.

Bon’s face fixed somewhere between a smile and a smirk as he looked up.  The lantern light caught the diamond facets and reflected in Bon’s eyes.  “Am I a good pirate Jack?”  Bon pulled off the tricorn hat and large bandana that it covered, and chestnut brown hair fell over the shoulders of Anne Bonny, alias Bon.

“You, my dear Bon, are a pirate’s pirate.  So long as I’m that pirate whose pirate you are.”  Jack reached an arm around the waist of his partner and kissed her, eliciting a coy smile.

“Why Captain, I believe this is a breach of ship’s articles.”

Anne turned and looked into Jack’s shaving mirror as he lifted the necklace over her head and fastened it behind her neck.

“I think you deserve it. You did more than your share of fighting today.”

Jack wrapped his arms again around Anne’s waist and whispered into her ear.  “You do and I’ll cut your throat.”


Andrew looked into her eyes.  “Mark Read, you are a poet.”

She could feel her heart beating in her chest, a tingling in other parts, and there, in the steel grey and amber of the setting sun the warrior in her let slip his grasp.  “Mary.”

Mary could hear the sound of her own breathing.  “Say it again.”

“I want to hear your voice saying my name.”

Andrew leaned in to her.  “Mary Read.”

By this time it had grown nearly dark save the shimmer of the helmsman’s lamp that lit the binnacle back aft.  They two sat in the dim evening twilight, almost touching; the cloak of near darkness giving each of them the courage to stare into the other’s eyes.  Mary gripped Andrew by the jacket as she had done before, and pulled him into her, pressing her lips hard against his.  Andrew wrapped his arms around her shoulders and waist and held her tightly.  Then Mary stood and led the carpenter below deck.               From behind the mast where Jack had rested earlier came the rustle of tarred canvas and Bon crawled out of the shadows.  She looked to where Mary and Andrew had just exited, stretched out the kinks acquired while lying in secret… and wiped tears from her face.

Jack cut in, “That’s enough of the arguing let’s get to the fighting.  Scotty!”

“Shipmates cast off your constraints, bare your weapons and give me your signal when you stand ready.”

The pirates mumble, some place a few panicked last minute bets and utter encouragement to one or the other of the two combatants.  Cooper lifted his baldric over his head, drew the heavy cutlass from its scabbard and tossed all but sword to the moss covered ground.  Mark unhooked his scabbard from the cavalry stile belt he wore over a muted red sash and slid the weapon slowly from its sheath.  The leather sleeve gulped for air as the clean blade left the confines of the oiled leather walls.  Unlike Cooper’s broad bladed navel sword Read preferred to carry a saber cut down to the length of a cutlass.  Lighter and faster it was more suited to the technical style of fighting that Mark had developed.

“Duelists at the ready?”

Cooper held his sword stiff armed before him, his powerful legs bent somewhat awkwardly fore and aft of his lean torso and broad shoulders.  “Aye aye.”