Joel was born in Orangeburg, South Carolina in 1960.  After a tour of duty in the US Navy, spent in South East Asia, he returned home and studied acting at the University of South Carolina but didn’t finish his BFA until eight years later at the University of Rhode Island.  Joel moved around the US for several years as an actor, dancer and theatrical fight choreographer before starting his graduate studies in Interdisciplinary Theater at Towson University in Baltimore, Maryland.  He came to Edinburgh in 2003 as a performer with Squonk Opera, met his wife while dancing Argentine tango and moved to Scotland permanently in 2004 where he has had success as a playwright and director.  Joel lives in Dalgety Bay, Fife with his wife and son.

In 2004 Joel was diagnosed with Parkinson's.

In Puccini’s la Boehm Rudolpho sings, “The greatest poetry teaches us to love”.
Maybe Puccini was being romantic but I can’t think of a more profound purpose or a more elegant way of stating it. 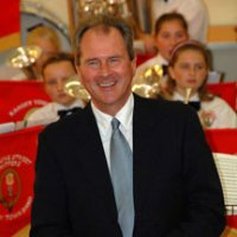 Bruce has established a reputation as a multi-faceted composer with Lomond Music's range of titles for young brass and wind bands, test pieces at all levels and a range of arrangements for various Swiss publishers. He has also a vast number of titles published for wind band. He has composed many commissions for a variety of groups,(some with financial assistance from the Scottish Arts Council), including Concertino for Trombone and Orchestra for Kirkcaldy Orchestral Society, THE VISIT for Anstruther Philharmonic Choir, MAGNIFICAT for soloists, choir and orchestra, a 20 minute Concerto for Trumpet and Orchestra for John Wallace and the Fife Youth Orchestra, SUN for BBC Young Brass player Katrina Marzella, a Tuba Concerto for James Gourlay, HELLAS as the test piece for the British Trombone Society’s Young Trombone Player Competition, and a recent commission for US Euphonium star, Adam Frey.

His career began as a professional trombone player with the Telefis Eireann Symphony Orchestra in Dublin and then worked with all the major orchestras in Scotland plus a huge variety of work in Pop, TV and Dance bands.

He also worked extensively as a copyist for many other composers and the Scottish Music Information Centre.

He has arranged a large body of work mainly for brass and wind band publishers, and also work for theatre.

As a conductor he has been conducting brass bands, choirs and wind bands for over thirty years, currently Musical Director of Cupar Choral Society. As an adjudicator he has appeared at many Music Festivals, Brass Band Competitions and Wind Band Festivals throughout the country. He works on the international panel of Jurors at a Composition Competition in Italy and acts as a Visiting Assessor for the SQA.

He took early retirement as Head of Music at Buckhaven High School in Fife in 2007 and is developing his career as a composer and adjudicator.

He is delighted to be part of the Music team in the development of MARY OF THE HIGH SEAS. 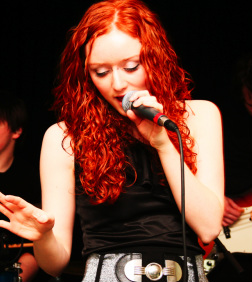 Is a Glasgow-born singer-songwriter whose catchy, memorable blend of pop, soul and funk belies the subtle complexity of each carefully crafted song. Now based in London, her performances are characterised by her accomplished instrumental skills and unique, versatile voice. After the release of two E.P's ("It's Time To Talk", 2007 and "This Blue Place" 2008) Rosie began working on new material for her first album, "Pictures" due to be released late 2011.

Mark also has branched out into writing, co-creating and performing Spain at the Citizens Theatre in 2011. This development saw the premiere in 2014 of his self-penned solo show there were two brothers, which will tour throughout Scotland in 2015.