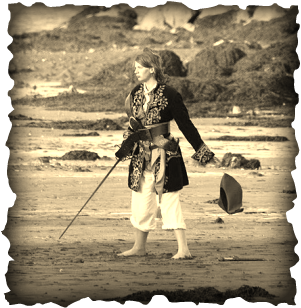 The pirates have assembled on a deserted beach for the duel

JACK:  Article six is intended to reduce the occurrence of fighting among shipmates. It don’t do a ship a hell of a lot of good for the crew to be picking each other off one by one. On the other hand it don’t do a ship any good to have unsettled grievances laying like poison in her belly. That being said article six states:

SCOTTY:   No one shall strike a shipmate on board the ship, but every man's quarrel shall be ended on shore by sword or pistol. At the word of command each man being previously placed back to back shall walk ten paces, turn and fire. If both miss their aim, they shall take to their cutlasses, and he that draws first blood shall be declared the victor. If the challenged party chooses, the ordeal may begin with swords.

JACK:  Now as you all know we laid to this morning to settle a quarrel between Quartermaster Francis Cooper and ship’s carpenter Andrew Fletcher. However, as a few of you know, shortly before we left the ship, able bodied Mark Read managed to invoke an additional injury from the quartermaster…

(Pirates and ANDREW react as MARY steps into the arena.)

JACK:  (continuing) And so has made an earlier appointment in order to have a fresh opponent, either that or to retain his dancin’ partner.

JACK:  (continuing) Now, I like to see a good fight as much as the next man but the Revenge can ill afford to lose good crew so I’ll ask the two of you… is there any way this argument can be settled short of crossin’ swords?

COOPER:  Truth be known Captain I’ve got no quarrel with Read… If he’d be willing to apologize I’d just as soon kill only one man today.

MARY:  I might be persuaded to withdraw the challenge Captain, provided… provided Cooper crawl over here on his hands and knees and clean the soles of my boots with his tongue.

JACK:  That’s enough of the arguing let’s get to the fighting. Scotty!

SCOTTY:   Shipmates cast off your constraints, bare your weapons and give me your attention when you stand ready.

SCOTTY:   Duelists at the ready?

MARY:  (once she is ready) Aye Scotty!