The Edinburgh concert reading of Mary of the High Seas was a great success.  We are currently looking for opportunities to do readings and workshop productions with the intention of
making revision based on discussions with those groups.


Duellists, reload and stand by... 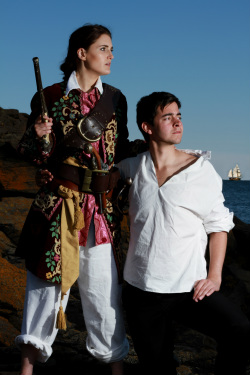 Mary of the High Seas is a historical action-drama set in the turbulent world of the back streets of London, the battlefields of Flanders and the action and adventure of the high seas. The course of the story takes Mary from a selfish young tomboy with a huge chip on her shoulder, to gregarious young war hero, to a self-reliant pirate with the heart of a lion… in the body of a woman… disguised as a man.

Here are some excerpts from our first review

“It is this quite modern examination of the character which is the existing musical’s greatest asset.”

“Mary’s voyage of self-discovery is a fascinating one.”

“Mason has also written an great selection of supporting characters. Mary’s mother Helen, played by Janet Lawson, has the interesting task of portraying depth to the audience while being seen by her daughter in all the two-dimensional prejudices of the teenaged. She has a great song, The Way to a Man’s Heart, a tongue twister with a belting chorus and a sweetly tripping, and highly ironic, middle section.”
“…sketched in with plenty of comic depreciation of the commanding officers.”

“…there are some great tunes in here and some nicely worked duets and ensemble pieces.”

“The supporting characters… are all well drawn, while the dramatic device of Bon and Calico Jack’s relationship works well.”

“There is plenty of scope here for a hugely expensive West End-style musical, complete with land and sea battle scenes, rollicking comedy and big musical numbers.”

“It is fascinating to see a piece of theatre during its development and hopefully this one will be back in some form or other. Another professional concert reading might be appropriate, but it would also be wonderful to see a full performance staged in association with one of Edinburgh’s more talented amateur musical companies.”

Click the image to the right to read the full review.
© 2011 Joel Mason all rights reserved.